Today we are celebrating National Flag Day across our country, with the Canadian flag officially turning 57-years old! From the uniforms of our Olympic athletes, to flag poles across our country, the maple leaf has been a national symbol since February 15, 1965.

Typically referred to as the Canadian flag, or unofficially, as the “Maple Leaf”, Canada’s national flag was the first to have been adopted by both houses of Parliament and officially proclaimed by the Canadian monarch as the national flag. The symbol of a leaf from a maple tree is a source of pride for Canadians, and is beloved by many across the globe.  Let us review some of the history around the leaf we so love and proudly display.

Here are 10 interesting facts about the Canadian flag: 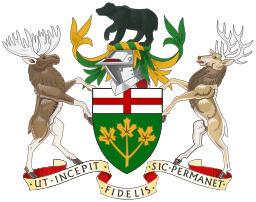 “Coat of arms of the Province of Ontario (Canada)” by Echando una mano is licensed under CC BY-SA 4.0, via Wikimedia Commons.

Liberal MP John Matheson, Pearson’s parliamentary secretary, led the government’s efforts to adopt a new flag. Matheson sought a design that used elements of the coat of arms proclaimed by King George V in 1921, featuring red and white colours and three maple leaves on a conjoined stem. Alan B. Beddoe, a war veteran and designer, added two vertical blue bars to what became known as the “Pearson Pennant” and was introduced to Parliament in June of 1964.  The blue bars were symbols representing the oceans to the east and west of Canada.

The Canadian Pearson Pennant of 1964, the flag design suggested by then-Prime Minister Lester B. Pearson. The original artwork was drafted by artist Alan Brookman Beddoe.

The crude sketch was eventually made a reality by Jacques Saint-Cyr, a graphic artist of the Canadian Government Exhibition Commission.  With a unanimous vote of 14-0, with the chair abstaining, the Stanley flag was chosen the winner on October 22, 1964.

George Stanley’s original flag design, as rendered by heraldic artist Alan Beddoe, incorporates a stylized maple leaf with 13 points. The leaf was later redesigned with 11 points by graphic artist Jacques St-Cyr to render the leaf visible from far. Flag Canada History by the Government of Canada.

Proclamation of the National Flag of Canada (1965). Dominion of Canada, Public domain, via Wikimedia Commons.

A full suite of Utility Engineering, Geophysics and Infrastructure Data Collection services backed by our focus on Safety, Quality and Customer Excellence.